So a Sardinian Warbler was ringed and released on the 30th of June at 5am. It then promptly disappeared giving no further views. This was annoying to say the least as I was asleep less than 1 mile from the bird when it was released (no mobile reception at the ringing site).


3 months later on 25th of Sept and who should re-appear in almost the same place but a Sardinian Warbler sporting a shiny ring. The 25th just happened to be my day off so a quick dash back to St Abb’s from Edinburgh and I’m glad to say that I made it.

Over the last week the bird has been showing on and off and calling frequently. It is most definitely heard before seen. Its favourite area seems to be a small patch of Blackthorn scrub about 50m north of the boardwalk on the N side of the Mire Loch. Mornings are the best time while the bird is most vocal. It seems that during strong wind it retreats deep into scrub (sometimes for hours at a time).

I’ve now seen the bird several times over the last week and have watched it feed on blackberries and sing… bear in mind I have also spent a long time watching a Blackthorn bush blowing in the breeze. A crowd of up to about 15 folks have been visiting with most going away happy, and who wouldn’t, having seen such a smart looking bird in perfect condition. 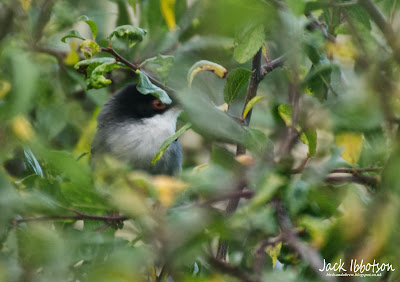 So a couple of questions remain: Where has it been for the last 3 months? It’s hard to believe that it could have been skulking around the loch all this time. The area is frequently visited by many birders and is also a ringing site. Although, if the bird was quiet, that gorse is pretty dense. Perhaps it has been just up the coast and is on its way back south. The final question is… Is it the same bird that was ringed back in June? Most likely! although without re-reading that ring who knows. St Abb’s has a good record for Sylvias. Ahem Marmora's.