So what’s been kicking off at St Abb’s Head…

Time to break it down…

Birds
Since my last post a Spoonbill flew past north on the 11/06 (a first for the reserve). Other recent highlights have been a drake Mandarin at Millar’s Moss on the 16/06 and a female on the 23/06. A Cuckoo was also briefly seen on the 22/06 at Northfield.

The breeders have also been keeping busy. Most of the seabirds now have young and guillemots will be jumping soon.  Meadow pipits, Rock pipits, Carrion crow, Rook, Whitethroat, Chiffchaff, Willow warbler, Sedge warbler, Blue tits and Great tits are all fledging and Coots and Mallards have plenty of young on the Mire Loch and at Millar’s Moss.

2 pairs of Little grebe have been spotted acting very territorial on the Mire Loch so hopes for some little, little grebes soon. Reed warbler has also been singing in the reedbed for a while now… breeding?

Lepidoptera
Plenty of NB Argus around as well as Small Copper, Wall Brown and the first Common Blues have begun to emerge.

Things have also slightly improved on the moth front with Marbled Coronet, Scalloped Hazel, Common and Map-winged Swift, Silver Ground Carpet and Brimstone all being recent additions. The trap is out again tonight, although with a monster of a moon it might not be much of a catch.

Cetaceans
No further sightings of Dolphins but rumours of a Whale spotted off the head are filtering in. A Harbour Porpoise on the 18/06 went south.

Odonata
Hordes of Common Blue and Blue-tailed Damselflies around the dam end of the Mire Loch today, but still awaiting the first dragons.

Long time no blog … been busy with full colony counts of auks. Counting Guillemots in my sleep!
Very little to report on the migrant front. A nice Black guillemot has been frequenting ‘Burnmouth Harbour’ Burnmouth Harbour at St Abbs Head, not Burnmouth! and was still around on the 7th. A female Black redstart has also turned up again at the lighthouse this evening... presumably a new bird as the last one was seen on the 7/5.

Bottlenose dolphins have been making almost daily appearances over the last few days. With 15-20 south on the 5th, 8 north on the 7th and further reports from St Abbs harbour. 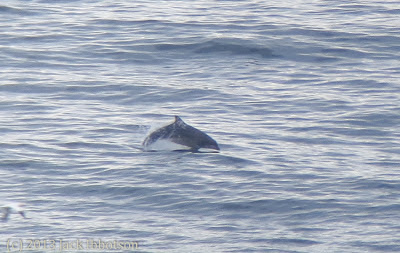 
Guillemots and Shags now have young. Kittiwakes, Fulmars and Razorbills won’t be far behind. One of our Puffins was bringing back fish tonight so it’s safe to assume they also have young.

Also Pied wagtails have fledged from nr boathouse and Rock pipits are being fed at the lighthouse.

Moth trapping has been fairly quiet recently but this Herald was a nice surprise.