It made a nice change to see some sunshine this morning, it doesn’t seem to be melting the snow much though.
Things were looking rather grim this week as the cottage roof began to leak and I was down to my last 3 teabags. I've managed to grab a few bags from the local shop and all is well again.
Bird wise nothing special at the moment and not really any news to report.
A crisp walk in the sunshine down to the tarn this morning showed good numbers of ducks, particularly Teal 60+. Snipe also seem to be in good supply at the moment and walking in the grassy, boggy areas never fails to disturb them… I wonder how many are on the reserve at the moment and how you could survey this?
Woodland bird pics... its all about the creepers and peckers today (tree huggers).
Other birds this week include…
Siskin 18E, Whooper Swan 6N (2juv), Raven 2, Woodcock 2, Fieldfare 16, GS Wood 2, Treecreeper 2 and Stonechat 4
Posted by jack at 06:18 No comments:

Email ThisBlogThis!Share to TwitterShare to FacebookShare to Pinterest
Labels: Treecreeper

Few pics of the first-winter, male Desert Wheatear.. what a little treat...


Thanks for the pics Ciaran.
Posted by jack at 11:30 No comments:

Desert in the east… Great White snow in the west!

Sorry, little news on Geltsdale today as I've been away and only got back yesterday. The only birds worth mentioning seen today are two Water Rails spotted around the screen area of the tarn.
Been away to the east catching up with the Farnes team and a good night in Seahouses was a cracking end to a cracking season on the Farne islands.

While over on the east side it would have been rude not to go see the cheeky Desert Wheatear at Newbiggin… a stunning little chap which we observed feeding on the sand flies around our feet (no need for bins with this one).
The next day and back on the west side, myself, Ciaran and Andy were treated with excellent views of a Great White Egret at Campfield. We then spent the afternoon at Caerlaverock and watched a stunning starling roost from Gretna Services. All in all a good few days.
Posted by jack at 11:07 No comments:

Yep more rain, drizzle and generally crap weather this week. Despite the weather it hasn’t been dull here.
It’s been a week for birds of prey with sightings of Peregrine, Buzzard, Kestrel, Sparrowhawk, Ringtail and Merlin.
Other highlights came on Thu with a flyby of 14 male Black grouse at the southern edge of the reserve and a flock of 22 Bullfinch on the slopes of Geltsdale Middle.
A walk down to the Tarn flushed 14 Snipe from a recently flooded field (peak winter count so far). Nothing too special to been seen on the Tarn but good numbers of all the common ducks, Goldeneye, Tufted Duck, Teal, Mallard and Pochard. The Whoopers seem to have moved on and a Little Grebe is now showing well by the screen.
A visit to the plantations in search of Woodcock proved unsuccessful but revealed a nice mix of Coal Tits, Long-tailed Tits, a Treecreeper and 2 Jays.
Unfortunately the weather hasn’t been great for photogrophising but heres a dull photo and some sketches. 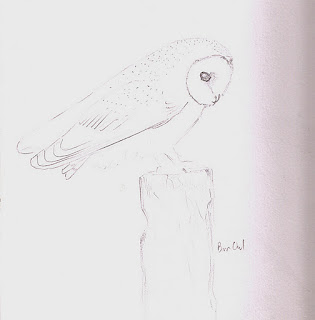 Away for the next couple of days, heading east for some end of season Farne’s festivities. Facing the joys of public transport on a Sunday when you live in the middle of nowhere is a treat! (3 mile walk to the train station at 7am).
Posted by jack at 09:39 No comments:

Getting a little bored of the persistent driving drizzle and rain all day everyday of late. At least I’m not on an island out in the North Sea being battered from all directions though. (http://farnephoto.blogspot.com/).
This week I have mostly been building dry-stone walls with intermittent brew breaks to dry off.
All’s quiet on the bird front (as usual) a few fieldfares (largest flock of around 300) have been regular on the trails. Distant views of a Merlin last night came while on a Hen Harrier roost watch up by Hadrian’s Wall.
Heading up Coldfell (the highest point on the reserve) tomorrow to inspect a fence and investigate some rogue sheep wanderings, so hope for better weather.
Posted by jack at 10:30 No comments:

So why the blog?
Three reasons; firstly because the weather is terrible, secondly there are very few birds around (took a two hour walk earlier and saw four birds), finally for friends, family, anyone and everyone to enjoy.
So what’s the blog about?
It will be about anything and everything that’s kicking off around the Geltsdale reserve on which I am based. A bit of photography, a bit about birds (or lack of), perhaps some moths and butterflies, maybe I’ll even throw in some sketches.
I’ll do my best to keep it updated as often as I can.
Basically get the kettle on, brew up a nice pot of PG and enjoy… 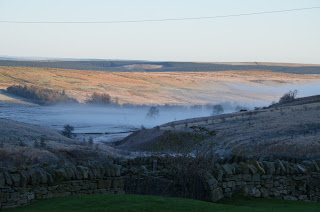 We had the first heavy frost of the winter last week. Weather has been much milder this week but with strong westerly winds and heavy rain it’s not been pleasant.
Bird wise it’s been a generally quiet week (as usual), 11 Whoppers have stopped by on Tindale Tarn probably avoiding the gale force westerly winds. Duck numbers also seem to be building with good numbers of the usual, Pochard, Teal, Goldeneye, Tufted Duck, Mallard and Wigeon.
For those who don’t know the Geltsdale reserve, the best initial winter description is; ‘a huge, bleak, expanse of upland bog’. The vast expanse of heather moorland is broken up by pockets of marsh, grazed meadows and ancient woodland and under RSPB management new mixed deciduous woodlands have been planted in order to re-establish the forests which once stood. 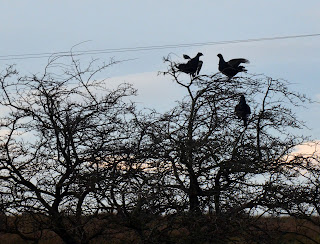 One of the many species set to benefit from the newly created woodlands. Black Grouse can often be seen feeding and even Lekking in the hawthorn tree tops at this time of year.
Jack
Posted by jack at 09:19 No comments: